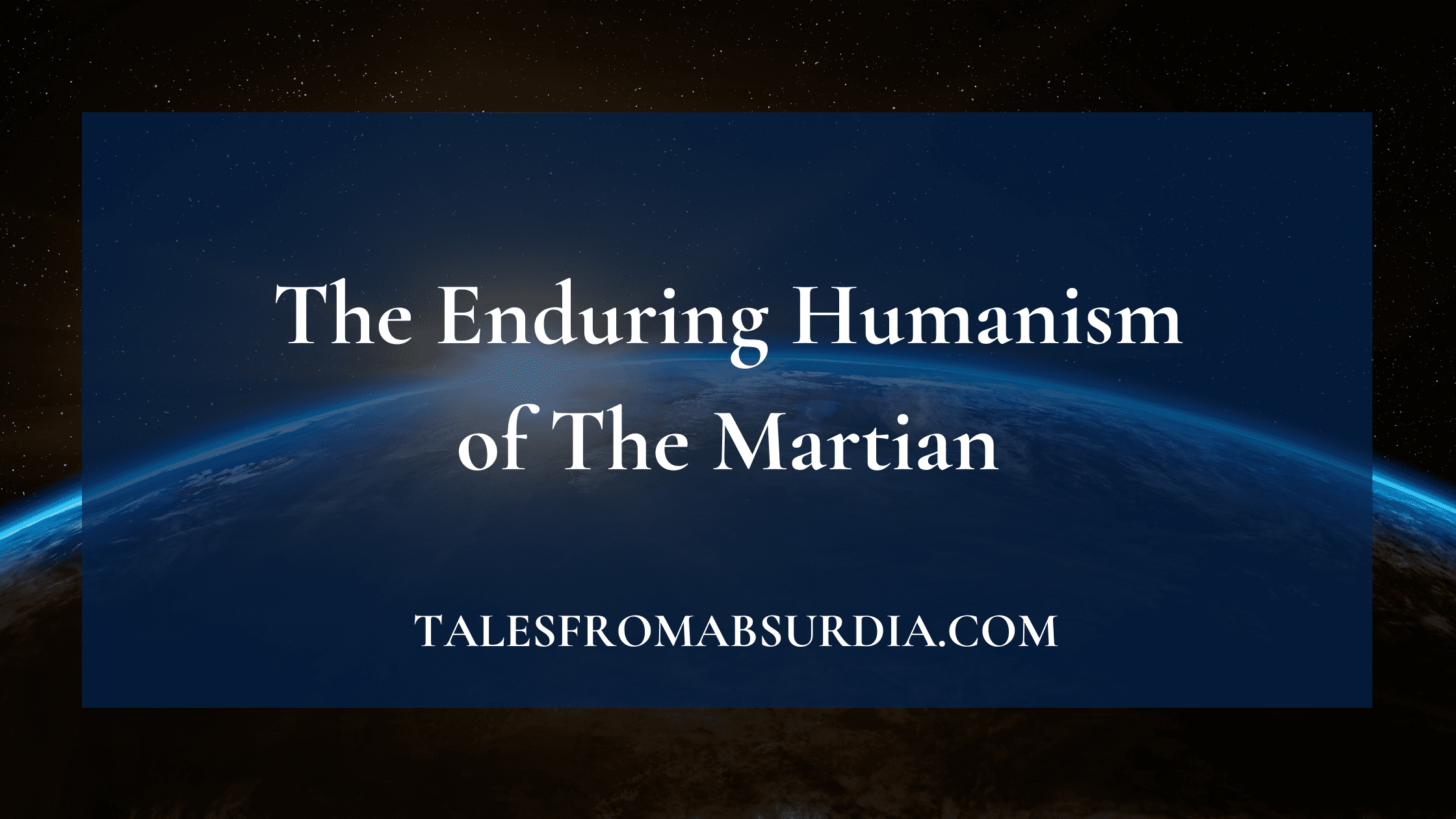 *Spoiler Warning: This article will discuss plot points within The Martian.

The Martian, written by Andy Weir, is a fantastic piece of fiction.

But it’s more than that. Weir’s novel (and by extension, the fantastic movie adaption) is a celebration of human ingenuity. It’s a sincerely touching endorsement of what we can achieve as a species when we aren’t fighting each other.

The Martian is, without a doubt, one of the great Humanist novels.

Humanism is a fairly fluid term, defined in a variety of ways. However, the common thread among all Humanists is a belief in reason, science, and human agency.

I think the following definition from the Routledge Encyclopedia of Philosophy serves as a good explanation:

…a commitment to the perspective, interests and centrality of human persons; a belief in reason and autonomy as foundational aspects of human existence; a belief that reason, scepticism and the scientific method are the only appropriate instruments for discovering truth and structuring the human community; a belief that the foundations for ethics and society are to be found in autonomy and moral equality…”

– Humanism defined by the Routledge Encyclopedia of Philosophy

Humanism isn’t without its issues. I suspect it will require some revisionism if/when we find intelligent life in outer space, for example.

In brief, Mark Watney – a NASA astronaut – is stranded on Mars following an accident. Presumed dead, his team have no choice but to leave him behind.

With the next Mars mission four years away, no means of contacting anybody, and only a few weeks worth of supplies, Watney’s situation is grim. “So yeah, I’m screwed,” he tells the reader.

Watney’s not wrong. Mars is not designed for human habitation. As situations go, this is probably one of the worst things that could possibly happen to a human being.

And yet his plight is undercut by a rather dark, self-deprecating sense of humour.

At first, I found this a little jarring.

Cracking jokes whilst facing impending doom? It seemed pretty unrealistic to me. I was a little concerned that Watney was falling into the irritating Wade Watts of Ready Player One territory. It’s a serious subject matter, so why would Watney be so flippant?

However, the humour just about works.

There’s a self-awareness to Watney’s attitude. He knows his chances of survival are low but in some ways, the humour functions as a coping mechanism. It’s Watney’s way of assessing the landscape, grounding his current situation, and figuring out how exactly he’ll survive.

At no point does he decide to give up and die. The survival instinct kicks in, and Watney’s optimism remains… in spite of the immediacy of his mortality.

There is always a very likely chance that Watney will die.

Watney is an eternal optimist, with a seemingly unwavering faith in himself.

Because remember – the novel is told through ‘SOL entries’ by Watney. The only time we get an insight into his psyche is if he chooses to log an entry for the reader/NASA.

Notably, he goes days at a time without reporting in. Sometimes he’s busy working on a complicated solution, but other times, Watney will end an entry on a depressing note and disappear for days.

Whilst he’s largely quite chipper, it does feel like a performance both for himself and the reader of his logs. He’s suffering.

And yet optimism in spite of remote odds is a theme coursing throughout The Martian.

When the Hermes team attempts the audacious ‘Rich Purnell Maneouver,’ there is a strong chance that the entire Hermes crew could die. The crew know this but perceive the risk to be worth it, to save their friend and comrade’s life.

Watney, NASA, the Hermes crew… all parties involved feel a dreadful doubt at various points, but their optimism and belief in mankind’s skills give them the strength to move past this doubt.

Man vs Mars: Being and Nothingness

There is a clear absence of the supernatural within this novel.

It’s science fiction, with the emphasis firmly on science.

Weir could easily have introduced some sort of ‘space monster’ in order to create tension and entertainment. Perhaps Watney could be assailed in the night, or whilst repairing the Hab.

But here’s the thing – The Martian doesn’t need this.

The Martian is a tale of mankind facing the great unknown. It pits man against nothingness and the void of space, forcing a confrontation between mankind’s knowledge and absence of knowledge.

There’s a power in the simple vacuum of space. An absolute nothingness. And told through 1st person by Watney, the reader feels that alienation.

Life is the prize, death is the consequence.

Weir places a strong emphasis on human agency. It’s a combination of Watney’s resilience and his crew’s skills that culminates in his rescue from Mars.

I think what I appreciate about this novel is the characters’ willingness to do anything, in spite of cost and risk, to save one human life.

When the Hermes crew realise there’s a chance they could save Watney, Commander Lewis holds a vote on whether they should return to Mars – at great risk to their own lives – or continue their course home.

They vote, unanimously, to mount the ‘Rich Purnell’ rescue mission – against NASA’s orders – because it’s the ‘moral’ thing to do.

Back on Earth, people of all nations are invested in Watney’s rescue. The ‘Mark Watney Report’ is the most watched show on television, as citizens of Earth pressure NASA to bring Watney home.

There’s a unity – he’s ‘one of us’. And this unity extends beyond national borders.

When NASA’s rescue mission explodes 51 seconds after launch, and all seems lost, the Chinese Space Agency lends their support.

After all, there’s a common purpose in this. To preserve human life and expand mankind’s knowledge of the cosmos. Both the US and China want the same thing.

With this in mind, it’s rather sombre reading The Martian in the current political climate, given how divided our world is. Cooperation between the US and China to do anything positive together seems increasingly unlikely.

But this is the greatness of The Martian – it’s fiction, but fiction entrenched in optimistic plausibility. Weir’s novel transcends political boundaries and demonstrates what we can do as a species – as human beings – if we band together in the pursuit of a common principle.

Naive? I don’t think so. I prefer idealistic.

The Martian is a wonderful example of Humanism in practice, and I greatly appreciate it for that.

Have you read The Martian? If so, what did you think? Let me know in the comments below!